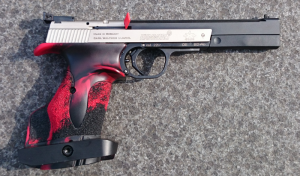 I bought my Hämmerli X-esse Sport about 1.5 years ago as an affordable alternative for a real target gun. The fact that the X-esse still looks “normal” compared to competition weapons, I took as a plus. I fired about 3000 rounds with it (rough estimate). This post here reflects my personal experience with my Hammerli X-esse Sport, calling it a thorough review would be exaggerating, but I hope that its still helpful for people considering to buy this fine weapon.

The X-esse is a modern version of the old Hämmerli 208. There are several versions: the Short (115 mm barrel), the Long (150 mm barrel), ISPC (a long with enlarged controls for practical shooting) and the Sport. The Sport has a 150 mm barrel, an adjustable front sight and comes with an ergonomic grip.

The gun has a double staged trigger with both trigger weight and slack path being adjustable. What I have found is that you can adjust the weight pretty good when allowing quite some trigger slack. However, I never managed to adjust the trigger to provide a comfortable trigger pull combined with a reduced trigger slack. When trying to find that sweat-spot in configuration, I always ended up with an oversensitive and thus unsafe trigger (note that the manual warns for this). So I’ve settled with the “larger” trigger slack, an aspect that could be a turn-off for some people. To be honest, I’m perfectly fine with that as I shoot a lot of centerfire (production) pistols which typically have quite some trigger take-up (I’m used to it).

Trigger reset is relatively long and in my opinion doesn’t give the feedback that you would want (but maybe I’m just spoiled by my H&K USP Expert in that department).

Apart from the above, the X-esse sport has a crisp trigger break, and that’s the most important thing.

There is little to say, it’s an ergonomic plastic grip. It feels very comfortable to me, I have no need to start modifying it. Someone at our gun club did, so it’s definitely possible.

My Hämmerli has seen three brands of ammo until now: SK, ELEY and RWS. From each of those brands it has seen a large variety of types. For some reason, my X-esse doesn’t like RWS ammo, regardless of type, I get about 1 failure to feed per 10 shots. Needless to say, I don’t buy RWS anymore. 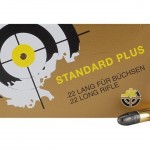 When I look objectively at my results, I shoot about the same with ELEY or SK. The only noticeable difference between match grade and “training” ammo for those brands for an average shooter like myself is that the “training” ammo contains an odd “lower quality” round (i.e. an unexpected flyer). But that happens only once every few boxes (of 50). Subjectively, I like SK better, somehow I’m more comfortable with the recoil, it’s a personal preference.

Most of the time my Hämmerli eats SK Standard Plus. these rounds are heavily waxed and deposit quite some wax on the gun around the feed ramp, on the magazine. The Hämmerli keeps however feeding reliably in spite of the grit build-up, so it’s not an issue.

The rear sight is well built and (as one would expect) adjustable for elevation and windage. It gives a clear sight picture. The front-sight can be adjusted for width by turning it (pretty ingenious system). Up until now (writing this article), I’ve always had the front sight in the most narrow configuration, but I’ll switch to the broadest setting on my next range trip to see if it makes a difference.

Two less desirable aspects of the rear sight are the fact that its mounted on the slide (and thus moves when firing), and that it’s relatively narrow (like a “standard pistol”). The broad rear sights often found on target pistols (like the SP20) give a more relaxed sight picture, you’ll get a more standard one with the X-esse.

The X-esse Sport comes at 1040g and is thus very light. For this reason it’s sometimes considered a junior or ladies gun. For slow fire, the weight works mainly in your advantage, but for rapid fire the gun is to light at the muzzle. The gun muzzle is rather jumpy for a .22 (sight picture gets disturbed). Hämmerli provides a set of barrel weights which can be mounted instead of the plastic cover at the front of the barrel (they are rather expensive!). I have not yet experimented with adding weight to the barrel. 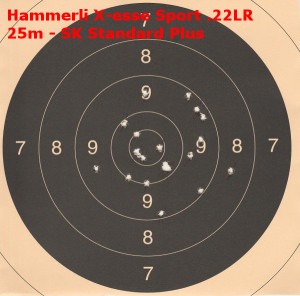 The Hämmerli X-esse Sport is a fine gun which comes at a medium price. Beyond any doubt, target pistols like the Hämmerli 280, SP20 or Walther GSP outperform this gun (better trigger, sights and balance). I have not yet been able to really train with a competition target pistol, so I don’t know whether it would make much of a difference for someone at my level.

Hämmerli positions the gun as “Fun-sport”, and that is exactly what it is. It’s an entry level target gun, which is perfectly suitable for plinking and playing around.

The million dollar question: will it ever leave my gun collection?

I think so. Its a great gun, I’m having loads of fun with it, but I’m just too curious to see whether a real match gun could help me improve my score. As there is no real reason for me to keep two .22 pistols in my collection, it might get replaced (on the other hand, used gun prices are so low around here that I might end up keeping it around anyway).