With a progressive press or turret press, one has to rely on mechanical powder dropping droppers to reload efficiently. I have the Lee Classic Turret with the Lee Pro Autodisk, and I’m very happy with it. With ball powders the Autodisk system works perfectly, it throws consistent loads reliably. However there is one problem: the fixed loads you are limited too.

Take the example of reloading .45 ACP, 230gn FMJ with Hodgdon HP-38 powder (i.e. nothing spectacular there). Looking at the load data we see a starting load of 4.3gn and a max load of 5.3gn. A range of 1gn (relative range of about 20%) is quite broad, however even with that range the autodisk gives you only 3 choices:

So what if the 4.8gn doesn’t reliabily lock the slide back and 5.1gn, actually more ~5.15gn (measured 10 loads at a time), throws out cartridges aggressively giving the feeling that it would be better to back of a bit?

Or at least that is what I thought… unfortunately, like many other people on the net I didn’t get any reproducability of thrown charges below ~6gn with HP-38. Not consistent really means, random throws from 0-5gn (i.e. it simply did not function).

To the rescue: google and a community of experienced loaders!

Fortunately many people have investigated the problems with the Adjustable Charge Bar (ACB) before me, and found a fix. The problem of not throwing consistently is caused by the fact that when the ACB is pulled back for loading powder into it, there is very little overlap between the powder drop hole of the reservoir and the ACD charge hole when it’s set to small charges (the problem is not caused by the bad overlap of holes when dropping of powder into the cartridge as some people incorrectly claim). So little that powder can’t flow consistently into the ACB hole and thus eventually can’t end up into the cartridge. The problem is illustrated on the picture below (courtesy this forum). 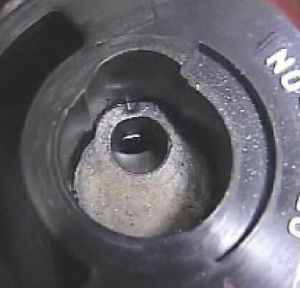 Fixing the ACB means moving the powder cavity to the back without increasing it’s size, so that it better overlaps the whole in the powder reservoir. This can be easily done by filling the hole in the ACB at the front side with e.g. some cardboard (as shown on various sites).
I did the same, however I used some milliput (epoxy for modelling) to make the fix more permanent and less susceptible to wear, and voilà, this is the result: 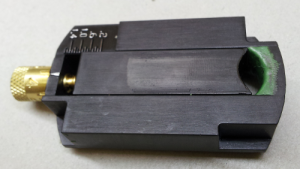 … an ACB which works just as good with small loads as the powder disks! Finally I can get that 5gn of HP-38 that I wanted so badly!

Please bring 2 ACDs on the markt, one for large and one for smaller charges! You’ll get even richer, I promisse, once my modified one wears out, I’ll buy that set!