My 9mm Browning Hi-Power seems to be ammo picky. Not that it has feed issues (it “eats” everything), but precision seems to be very ammo dependent.For example: with GECO ammo 124gr FMJ, I have no trouble holding the black (i.e. get decent groups) on a standard ISSF pistol target at 25 m (diameter of black = 20cm = 7.8 inch). However, with S&B or Magtech 124gr FMJ ammo, shots end up all over the paper target. I should add some quantitative data on this phenomenon some time, but I’ve been testing this several times, shooting groups of 5, switching ammo brands.

So what is causing this? 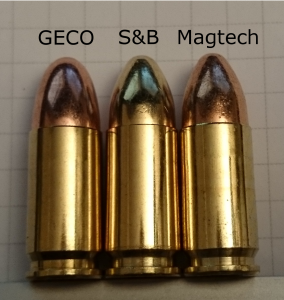 We all know that some guns tend to like some ammo brands better than others, so I probably should have just settled with “My Hi-Power likes GECO best”. But, I was wondering if I could find some indications on why this is the case. This question was primarily instigated by the observation that bullet shape between GECO at the one hand and S&B and Magtech on the other differs. As you can see on the picture below, GECO FMJ bullets are “rounder” than the others which have a “notch”  in their curvature leading to a sharper point.

My gun, all Hi-Powers or all guns?

An interesting question off course is whether this difference in precision is related to my gun only or to the Hi-Power design in general? Is the same happening with this ammo in other 9 mm, or is there something particular about the S&B ammo that doesn’t fit Hi-Powers?

To answer these questions, many rounds need to be fired in different guns. Unfortunately, I can’t do this right now, I only have access to a single 9 mm (the Hi-Power) for playing around. In the coming months another 9 mm will join the collection, I’ll be testing this ammo with it as well.

A few aspects that influence precision that I can think of include:

(disclaimer) The first test that one should do to do decent research into this phenomenon is to measure bullet exit velocity with a chronograph (variation in speed). Unfortunately, I don’t have access to such a device. While we’re at it, I should add a further disclaimer: all measurements have been done on far to few cartridges in order to show any statistical significance. I am aware of that, but I’m not going to spend the time (and the cartridges) on doing a detailed investigation with the limited tools I have at hand. I’ve done some initial measurements to find out if there is a “simple” explanation for the precision difference I experience (spoiler alert: and it turns out it isn’t simple).

A first though that came to my mind was that maybe barrel wear was in play, as my Hi-Power is an old second hand gun. Maybe the GECO bullet shape resulted in a better sealing of the worn barrel? However, a detailed visual inspection and measurement of land-groove height at the muzzle indicate that this barrel is far from worn out.

Additionally, measurements of bullet diameter (see further) do not show differences between ammo brands and seems to be within spec.

Another hypothesis was that maybe the GECO bullets have a larger bearing surface (i.e. where the bullet touches the rifling) and are thus getting better guidance and correct spin. Looking into this requires pulling the bullets, I thus decided to subject the ammo to an overall “uniformity” test. I’ve done measurements on 3 bullets of each GECO and S&B. One could say that data on only 3 bullets is merely anecdotal and has no statistical relevance, to which I agree, however I think there is some indication that (the more expensive) GECO ammo is made too tighter tolerances.

The first thing I measured was COAL (Cartridge Overall Length) on 20 cartridges. As can be seen on the table below, both brands are very consistent, with S&B actually being more uniform on the 20 cartridge sample. All length measurements have been done with calipers with a .01 mm (0.0005 inch) resolution. 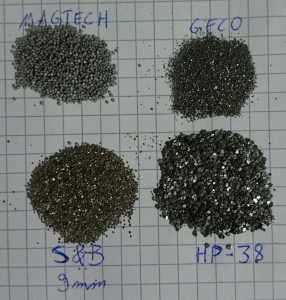 When pulling the bullets of several cartridges with my RCBS kinetic hammer, I tried to measure the powder in the cartridges. I got relatively large deviations (.3 gn) on my measurements and suspect that they are incorrect. When redoing this, I will need to improve on ensuring that not a grain of powder gets left in the bullet puller, something that I haven’t done careful enough (I suspect some powder got stuck to the foam bullet catcher in the kinetic hammer). I currently don’t feel the need to dismantle an additional batch of cartridges to further investigate this. What is clear however is that all brands use very different powders as you can see on the picture below (the well known Hodgdon HP-38 is added as a reference).

As mentioned before, I pulled 3 bullets of S&B and GECO 9mm FMJ ammo. The table below shows basic measurements of these bullets. Note that all length measurements have been done with calipers with a .01 mm (0.0005 inch) resolution, weight with a scale with +-0.1 gn accuracy. Bearing surface has been estimated by putting the bullet in the barrel at the muzzle end and measuring how far it sticks out.

The figures above show no shocking differences between the two brands of ammo. With a sample of only 3 bullets per brand, it’s hard to draw any conclusions with these results. However, I believe that there is an indication that the GECO ammo is built according to tighter tolerances (all measurements have been doublechecked BTW).

The jacket of the S&B bullets is made of a single material, I suspect brass/copper (it’s non magnetic). The GECO jackets however are made of a ferromagnetic metal (probably steel) with a thin coat of (I assume) copper. The S&B jackets are thus softer than the Geco jackets which is undoubtedly the reason why a crimp groove is clearly visible on the S&B bullets and not on the GECO bullets.

I don’t have a runout gauge to check whether a bullet is seated perfectly straight in the case. There is no obvious noticeable (visual inspection) runout in the ammo of those brands.

The differences that I spotted between GECO and S1B 9mm 124gn FMJ:

I’m afraid that the only conclusion one can draw here is that more data is to be collected. More cartridges (from different batches) are to be measured (increasing statistical significance of the measurements), measurement methods are to be improved (i.e. more equipment is to be bought). The ammo is to be tested with more guns (Hi-powers and others). I (for now) will not spend the time further looking in to this.

The tests that I’ve done seem to hint into the direction that GECO ammo is built with tighter tolerances than S&B ammo. This is very well possible as it is the more expensive ammo. I’m not knowledgeable enough to know whether the variarion measured here could cause a noticeable difference in precision, it would be great to receive some feedback on this.