I’ve written about the issues with the Lee Adjustable Charge bar (ACB) that I had and the solution to this problem. In my case, I only found out that it didn’t work for me AFTER buying it. However, if you are still looking for an adjustable power thrower for your Lee autodisk powder measure, I came across this clever solution (cf. rugerforum): 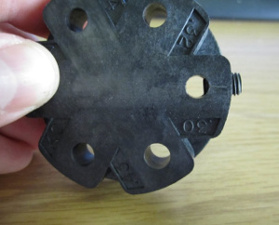 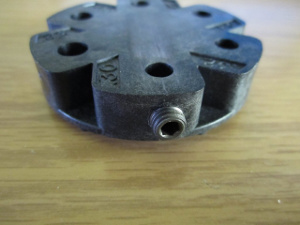 I have not tried it, but it seems a valid option. I’m just wondering if you don’t get into trouble with inconsistency with respect to powder getting stuck on-top of the screw (and falling of one time and not the other) and the cavity below the screw.

I’ve found these tables cross-referencing lee autodisk volumes with powder weight (in grain) on the internet somewhere. I’ve found these to be pretty correct. BUT use this data as starting reference only, always verify the actual load dropped (there might be errors in the table, there is variation of humidity changing weight/volume, maybe a powder composition changed, etc).

END_OF_DOCUMENT_TOKEN_TO_BE_REPLACED 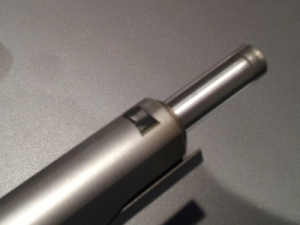 END_OF_DOCUMENT_TOKEN_TO_BE_REPLACED

With a progressive press or turret press, one has to rely on mechanical powder dropping droppers to reload efficiently. I have the Lee Classic Turret with the Lee Pro Autodisk, and I’m very happy with it. With ball powders the Autodisk system works perfectly, it throws consistent loads reliably. However there is one problem: the fixed loads you are limited too.

END_OF_DOCUMENT_TOKEN_TO_BE_REPLACED

I’m one of these annoying people who can get worked up when spotting mistakes in a movie :)… No not really, but it’s fun to spot them.

I do get a little annoyed by the constant “slide racking” that is done in movies to add to the suspense. Hollywood heroes typically rack their slides just before entering that last room (after clearing out a complete building of bad guys) where the boss of the foes resides. What does that tell us? Either they have been walking around without a round chambered (not so practical I would say) or they are addicted to cycling good cartridges through their guns (wasteful!). Oh BTW, anyone remember the “unlimited ammo” movies of the 80’s?

Anyway, those are the obvious mistakes, but once in a while you spot a more subtle one. Like this mistake in Machete. I like the movie, it’s an action comedy, it’s over the top, so the movie definitely does not have the intention of being realistic, I get that. However, I still think this was an unintended mistake: 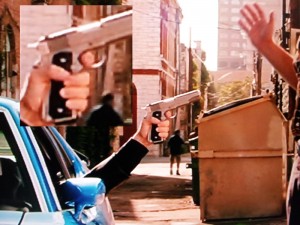 Watch that 1911 used to threaten this person, it’s not cocked… Being a SA only pistol, the only danger that could come from the villan is when he thows this +1kg of steel at the other ones head (granted it would hurt like hell if thrown well). On the other hand, when staring down the gaping hole of a .45ACP barrel, would you notice it’s not cocked? And then bet on the fact thatit’s not one of those rare SA/DA variants (this isn’t BTW). 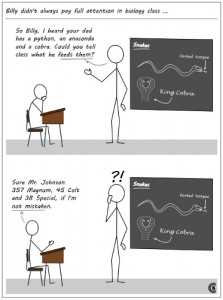 Test your intelligence and gun knowledge! 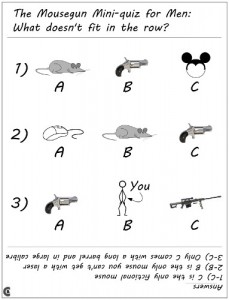 A little cartoon I’ve made… 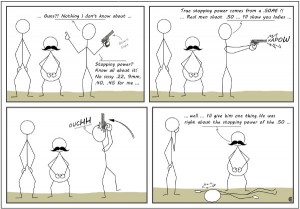 A funny little cartoon that I found on a forum… 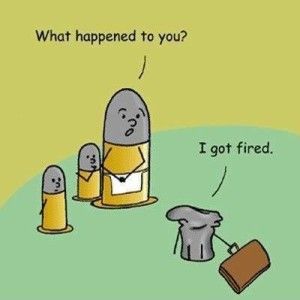 I’ve created a timeline giving an overview of the most remarkable autoloader handguns in history. It aims to give the interested reader a quick overview and a starting point for exploring over 100 years of ingenious mechanical design.

The timeline is to be considered a work in progress.